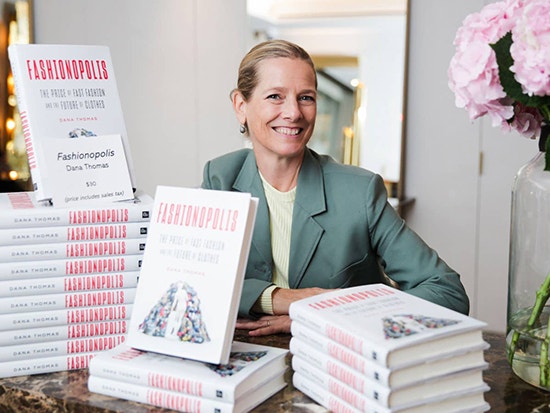 Author of Fashionopolis: The Price of Fast Fashion
and the Future of Clothes

No one believes in the power of fashion more than we at The Webster do. We believe fashion is fun, creative,
transformative and an essential means of communicating and expressing yourself to the world. We also know
that fashion’s impact goes far beyond those things. So does Dana Thomas, the bestselling author and veteran
fashion journalist, whose new book Fashionopolis: The Price of Fast Fashion and the Future of Clothes
investigates the industry’s damaging role in the global environmental crisis and the movement to reform it.
The book is stacked with staggering statistics: More than 100 billion items of clothing go unsold each year;
blue jeans are the most popular garment in the world, with 6 billion pairs produced per year, and also have
the most polluting manufacturing process; the fashion industry accounts for 10 percent of carbon emissions
and 20 percent of industrial water pollution. In researching Fashionopolis, Thomas traveled to the site of the
Rana Plaza disaster, visited factories in Vietnam, interviewed entrepreneurs and designers, such as Maria
Cornejo and Natalie Chanin, who are dedicated to making their fashion businesses as sustainable and low
impact as possible. The damage fashion has wrought is real, but Thomas sees hope. Here, she talks to us
about both.

The Webster: Fashion has really woken up to its part in the climate crisis in the last couple of years.
Why?

Dana Thomas: It's become P.C. to do it, and it’s become very un-P.C. very quickly to not be doing it.
That’s why LVMH just bought Stella McCartney because they were not as ahead as they probably should
have been and she’s going to push them there really fast.

TW: But the crisis has been obvious for a long time and fashion has turned a blind eye for years. Now
suddenly the industry is all over it. Why has it caught on so hard now?

DT: The millennials have gotten to an age now where they have the power of the purse. They were students
before saying, "This is all bad stuff," but now they have the power of the purse. They're in their 30s, they're
working, they're making money, they're buying stuff, and they're like, "We don't buy that." That's not just in
fashion, it's across the board. Just like there's a whole generation of readers who don't buy magazines.
They read everything online because they've never had a daily newspaper in their hand because it was
already online when they started reading. So it's generational. There's a whole market of conscious
consumers out there who care about these things. Really, really, really care. And it's not just some segment
on the side of the mainstream. They made it mainstream finally. Finally!

TW: What surprised you the most in your research?

DT: Definitely the fact that the average garment is worn seven times before it's thrown away. I thought that
was bad and then I was at the Copenhagen Fashion Summit, moderating a panel about resale and renting
of clothes, and the executives from Y Closet, which is the Chinese version of Rent the Runway said, "In
China, that number is three." Clothing items are worn three times before throwing away.

DT: I was like, Oh my God. Think about a cotton T-shirt. Think about the farmer who planted the cotton,
nurtured the cotton, then harvested the cotton. Then it goes to the mill and it's woven, and then it's dyed.
Then it's sent to the fashion designer. They've made the sample, and then they've cut up the sample. And
then it's sent to the factory, and it's made in a factory. Now it goes to the store, and it gets to the retailer, and
it's sold. And you wear it three times and throw it away? The disregard for the whole process, and the
investment of people's lives. It just kills me.

TW: Is this really bad news for the Zara's and H&M's of the world?

DT: I don't know. I hope so. I think their model is just so damaging on so many levels. It's so narcissistic on
so many levels. It's to make one man extraordinarily rich… I saw a piece this morning, that only one out of
eight Bangladesh factories pass international standards for safety. One out of eight. And H&M is the
largest contractor in Bangladesh. So that means one out of eight of their things that they sell was made in a
safe factory. The other seven are not.

TW: Do you feel like your book is at odds with consumer culture?

DT: There is a way to do it. It's just that it’s not the high-volume, high-profit model… There are two reasons
to be in the fashion business. To make clothes or to make money. And the people who are in the business to
make money are the ones that are having the biggest impact because they just care about the profits.

TW: What is the good news?

DT: I see hope in people like Natalie Chanin [of Alabama Chanin] for sure. She proves you can have a
very good business and have zero waste and be involved in the community and not be based in the big
cities, but be far-flung and employing people in other regions and places. In fact, it makes more sense,
because your overhead is low and your cost for doing business is less, and your cost of everyday life is
less, so you don't need to make such gigantic profits and live in mansions in big cities…Then the rise of the
sharing economy and renting of clothes and resale of clothes. I did a panel this year in Copenhagen and
one of the figures was that in 2018 the fast fashion sector rang up $35 billion a year in sales and the
second-hand apparel market was $24 billion.

DT: It’s consumer-driven. Definitely. We’ll never get rid of fast fashion, just like we've never gotten rid of fast
food. Fast food nation came out, what 15 years ago? There's still McDonald's, and Arby's and Burger Kings
around the world and there are still lines in them, but there are better alternatives. We also have the
farm-to-table movement and it's not just a little thing, it's a big thing.

BOOK AN APPOINTMENT
Back