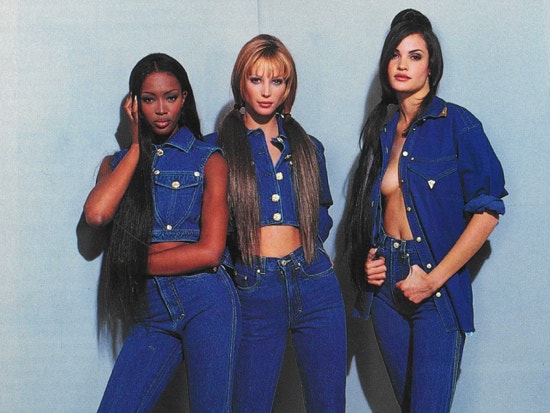 THE FABRIC OF THE PEOPLE: DENIM

The fabric of the people, and by people, meaning all types: miners, cowboys, Hollywood legends, counterculture rebels, rock stars, and high fashion all played a role in making denim truly iconic.

While pinpointing the exact moment of its creation and where the fabric stemmed from is a bit challenging, the start of denim's popularity can be traced back to 1873 when Jacob Davis and Levi Strauss patented a line of indigo-dyed denim with pockets that were made for workwear. These garments were adorned with copper rivets that were used to reinforce the pockets, which gained the following of miners and laborers, who appreciated their durability.

Not long after, they designed what is easily their most popular style to this day, the 501, which help launch the birth of a new of a garment category. Continuing to build upon this brand's identity as Levi's, a design of a double arch of orange stitching was added to all of the back pockets as a signature. In 1890, Levi's patent ended, which opened the gates for new designers to create their denim. OshKosh B'Gosh, Blue Bell (Wrangler), and Lee Mercantile were quick to follow suit in producing denim with Lee Union-alls jeans becoming the standard issued uniform for workers during the first World War.

Like many things, Hollywood is responsible for the early romanticism surrounding the blue jean, by using denim in the costumes of cowboy stars like John Wayne and Gary Cooper. It gave consumers a new image of what casual leisurewear could look like. With the help of publicity photos of actress Ginger Rogers and Carole Lombard embracing this new trend and American Vogue, adding their stamp of approval, women of the '30s were influenced to add this style to their weekend wear.

The 1950s was when denim gained its first association of sex appeal, becoming a staple in rebellious anti-establishment youth of the likes of Marlon Brando and James Dean. As the decades passed, denim stayed loyal to this group of rebels, evolving with their causes. The '60s and 70's rebels, also known as hippies, wore jeans in protest to show support for the working class, and feminists of this time wore them to demonstrate gender equality. Denim's ties to counterculture were so strong than many high schools began to ban the style, causing the popularity to skyrocket.

"Nothing Comes Between Me and My Calvin's." Denim in high fashion took o after this scandalous commercial for the time went live, featuring a young Brooke Sheilds modeling Calvin Klein Jeans. With another decade starting, the blue jean is found in a new wave of sex appeal, with other ads from Guess. featuring model Claudia Schier adding to its seduction. Calvin Klein was the first to show blue jeans on the runway, with other designers to follow in the 90s such as Versace, Dolce &. Gabbana and Dior. From the runway to the red carpet, It wasn't long before Hollywood again added their mark on the latest styles of denim.

Present-day denim is representative of its history; it a style that is always evolving and latching on to that next subgroup that welcomes its essence into their cause. It is to this day the most inclusive style, with an option for everyone.