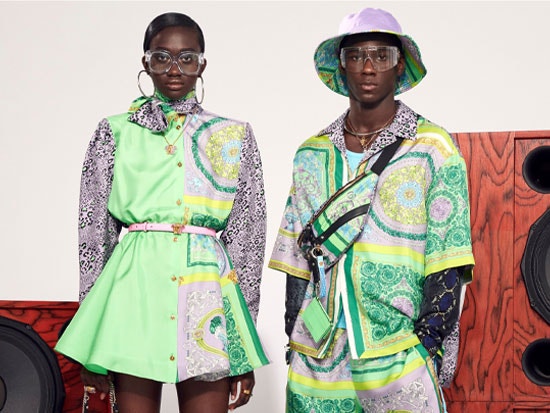 What did Louis XIV and Gianni Versace have in common? A love for colorful and ornamented flamboyance, summarized into one word: Baroque.

For all that the Sun King and the 80’s fashion king did for it, neither of them invented the Baroque style. The Catholic Church and its marketing eorts are the reason behind the heavily detailed designs.

In the early 17th century, the Catholic Church encouraged a strong dierentiation from the simplicity and austerity of Lutheran Protestantism. When Protestants used color sparingly, Catholics employed rich contrasting tones like burgundy, gold, and emerald. When straight lines and simple materials were favored by Lutherans, exuberance, movement, and excess characterized the Baroque style.

It all started in Italy, where churches were designed to convey a sense of awe in churchgoers. From the architecture to the art and even the music played during services, everything was designed to provoke an emotional reaction through sensory overload. This style rapidly spread through Catholic Europe, from Spain to Poland.

'Baroque' is a French word originating from the Latin 'Baroco', which in the 16th century, meant complex, bizarre, and uselessly complicated. After churches, the royals and aristocrats adopted the style and incorporated the aesthetics in palaces' architecture, furniture, tapestries, paintings, tableware, and of course fashion. What began in the court of Versailles, quickly traveled to Imperial Russia, and as a result of colonialism and the spread of Christianity, to the Philippines, India, and Peru. Baroque was the first truly global trend and the most impactful marketing campaign at the time. After its golden years, Baroque fell out of style – it was ridiculed and perceived as bad taste, soon supplanted by Classicism.

That, however, wasn’t the end of Baroque style. Like Seinfeld, Baroque enjoyed a few re-runs: the first major one, Neo-Baroque, occurred at the end of the 19th century in Europe. In the 1980’s, Baroque made a second notable comeback when Italian designer Gianni Versace mixed the artistic tradition with pop art. Gold chains, Medusa heads, leopard skins, contrasting vibrant colors, rich shiny fabrics – nothing mild or restrained in Versace's re-interpretation of Baroque. In the 1980’s, this over-the-top aesthetic was exactly what the public wanted. Versace’s bold designs met incredible success with fashion crowds and music celebrities alike. Notorious BIG and Lil' Kim were seen often in the designs, and supermodels like Linda Evangelista and Naomi Campbell rocked the style on and o runways.

In the 2010’s, Donatella Versace reintroduced the world to her late brother's aesthetic. Baroque was back, stronger than ever, thanks to a global collaboration with the giant H&M. The aesthetic also found a new generation of hip hop artists and celebrities such as Drake, but also inspired emerging fashion designers like Riccardo Tisci. Today in 2020, Baroque prints are still all the rage, Versace's Resort 21 is balancing classic black and brown pieces with vibrant Baroque and animal prints. Baroque it seems, never completely goes out of style.