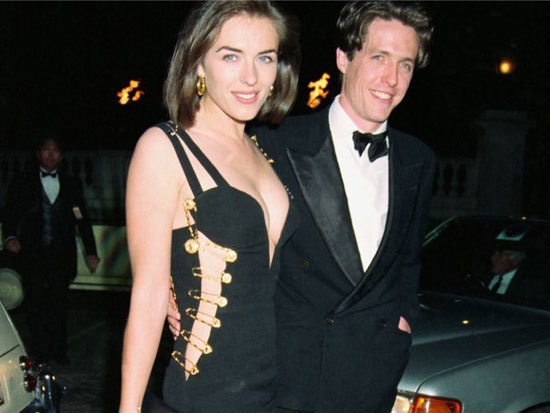 In 1994, a young and unknown Elizabeth Hurley stepped onto a London Red Carpet wearing what would later be known as That Dress. Overnight, Hurley became a celebrity, and the Versace Safety Pin dress entered the fashion pantheon.

Above: Elizabeth Hurley in Versace

Since then, the Dress, which has its own Wikipedia page and has gathered as much controversy as it has accolades, has been referenced so many times that it earned its status as a fashion icon.

Versace was not yet a household name then, but safety pins, however, were already famously controversial and earned a reputation in the 1970s, thanks to their affiliation with the Punk movement. Malcolm McLaren and Vivienne Westwood, owners of the London store SEX, were selling fetish and bondage wear and safety pins clothing. They offered a place for young punk artists to gather, create, and even work.

The Sex Pistols, who met at the store, gave the safety pin its moment of fame through their God Save the Queen music video in which lead singer Johnny Rotten wore a torn white long-sleeved t-shirt held together with safety pins.

From then on, the humble safety pin became the symbol of Punk, defiance, and rebellion, transforming from a hallmark of Punk to the hallmark of one of fashion's most bold and flamboyant labels.

The Spring Summer 1994 Versace collection carried several looks bearing gold safety pins from mini kilts to gowns. However, the most daring number was a black lycra dress seemingly barely holding itself together, paired with a plunging V neckline. That Dress never quite faded away after this scandalous red carpet apparition at the Four Weddings And A Funeral premiere — Lady Gaga, Dua Lipa, and Elizabeth Hurley's son Damian Hurley have all donned the look. The sartorial nods to That Dress also carry on off the Red Carpet or the Runway with pieces inspiring this season's collection.